pfandbrief.market: The Pfandbrief market at the start of 2018

In 2017, the volume of Pfandbriefe in circulation did not decline for the first time in more than 17 years and now stands at EUR 362 billion. In their analysis provide the authors an overview of the developments at the Pfandbrief market at the start of 2018.

The article below does not contain all explanatory graphics. They are included in the PDF edition for Download.

In 2017, the volume of Pfandbriefe in circulation did not decline for the first time in more than 17 years and now stands at EUR 362 billion. Deutsche Bundesbank’s capital market statistics show that new issues in fact exceeded maturing bonds by a comparatively small EUR 3.3 billion. Nor should the percentage increase of 0.9% be seen as a reason for excessive euphoria. After all, the number was preceded by declines of 6.6% (in 2016) and 44% (in 2015). 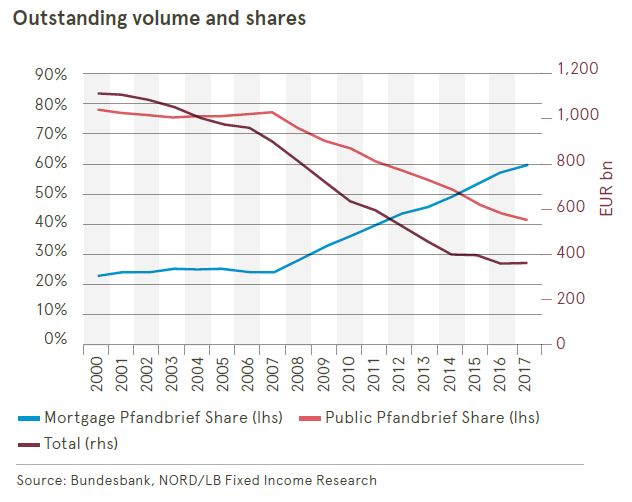 This made Pfandbriefe the most significant product in the euro-denominated covered bond segment in the years 2014 to 2016; in the remaining years, they ranked second. 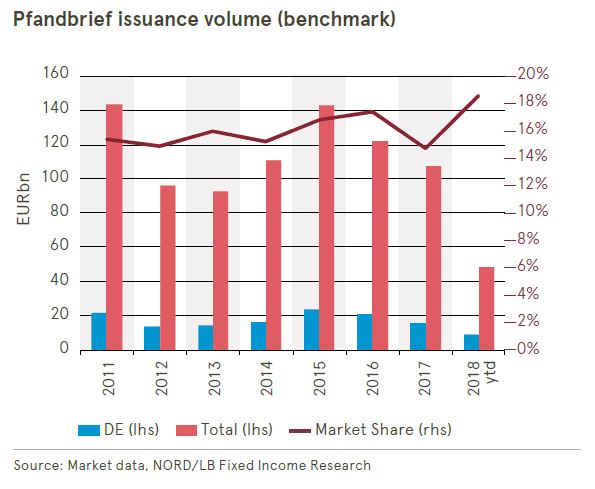 As a result of the European Central Bank’s purchase programme, spreads versus swaps have on balance tightened since September 2014. In the last two years in particular, spreads have been stable and volatility has been very low. In the first three months of the year, spreads were also stable at a low low level. In recent months, spreads versus Bunds have been notably more volatile. While the spread of generic five-year Pfandbriefe relative to five-year generic Bunds was 52 basis points at the end of 2016, it stood at just 34 basis points at the end of 2017. 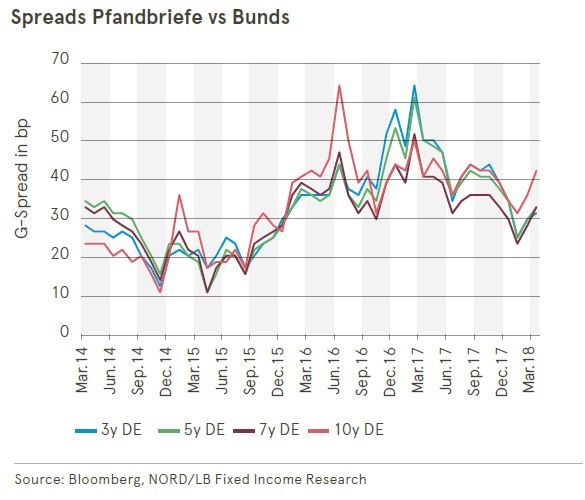 At the end of last year, the issuers that were members of vdp (plus Dexia Kommunalbank) had a total volume of outstanding Pfandbriefe of EUR 351.7 billion according to the transparency information published under sec. 28 of the Pfandbrief Act. Year-on-year, this represented a 2.5% decrease in outstanding Pfandbrief volume (Q4/2016: 360.6 billion). Average overcollateralisation across all types of Pfandbrief fell to 28.8%. While the overcollateralisation of Public Pfandbriefe was slightly lower (25.3%), it averaged 30.7% for Mortgage Pfandbriefe. The share of Mortgage Pfandbriefe increased to 57.9% at the end of the year. At the same time, however, the share of Public Pfandbriefe dropped to 41.3%. Ship and Aircraft Pfandbriefe remained niche segments with very few active issuers. They accounted for 0.7% and 0.1% respectively of the total market.

At the end of 2017, the volume of outstanding Mortgage Pfandbriefe amounted to EUR 203.5 billion.

While it was therefore above the prior-year level (Q4/16: EUR 197.1 billion), it remained below the volume at the end of Q2 2017. Outstanding Public Pfandbriefe amounted to EUR 145.2 billion, which represented a year-on-year decline of about 8.6% (around EUR 13.6 billion). Public Pfandbrief volumes thus continued to trend lower in 2017. Compared to year-end 2016, the volume of Ship Pfandbriefe decreased from EUR 3.6 billion to EUR 2.4 billion (-32.6%), while the volume of outstanding Aircraft Pfandbriefe fell by about one half (from EUR 1.0 billion to EUR 0.5 billion).

DZHyp would become the largest Mortgage and Public Pfandbrief issuer

Among the top 3 of the Pfandbrief issuers by outstanding Hypothekenpfand-brief volume, Münchener Hypothekenbank (11.4%) continues to occupy the top spot, followed by WL Bank (8.6%) and UniCredit Bank (8.3%). The top 10 institutions have a combined market share of 69.6%. In the Public Pfandbrief segment, NORD/LB has been the largest issuer with a share of 11.5% since the Q3 2017 following the acquisition of Bremer Landesbank. Positions two and three were reversed; BayernLB (11.4%) now ranks ahead of Helaba (11.2%). Overall, the concentration remains far greater than for Mortgage Pfandbriefe. The ten largest issuers of Public Pfandbriefe together account for 82.0% of volume outstanding. As of today, this year’s planned merger between WL Bank and DGHyp to form DZHyp would create the largest issuer in both of the above Pfandbrief market segments. The new entity would cur-rently have 13.4% and 11.6% shares in the Mortgage and Public Pfandbrief markets respectively.

In 2017, the Pfandbrief market did not shrink for the first time in more than 17 years and grew across all types of Pfandbrief by EUR 3.3 billion to EUR 362.2 billion. Although Public Pfandbrief volume continues to decline and the adjustment process in the segment does not appear to have ended completely, we believe that a further decrease in outstanding Pfandbrief vol-ume will become increasingly unlikely simply due to the adjusted volume ef-fect. In particular, the growth in Mortgage Pfandbrief volumes in recent years – which is now the most significant type of Pfandbrief with a volume out-standing of EUR 214.0 billion – now supports the thesis that the adjustment process in the Pfandbrief market is virtually over and that volumes can be expected to grow again in the medium term. Since the ECB launched its pur-chase programme, spreads in the covered bond market have adjusted con-siderably and are now at a level that would not have been reached in our view if supply had not been artificially cut by the Eurosystem. Pfandbriefe have of course also profited from this scarcity, which has led to lower funding costs for issuers as well as lower interest rates for borrowers. Now that the ECB has begun to exit from QE and net purchases are expected to end this year, we believe that the period of permanently lower spreads should be over in the foreseeable future. In the first three months of this year, investors appear to have started to price the ECB’s exit into the spreads in the covered bond market. As a result, spreads are slightly wider than at the start of the year. We assume that this process has only just begun and will probably continue for quite some time. Nonetheless, Pfandbriefe showed the lowest volatility in previous widening moves in the covered bond market and thus offered inves-tors a certain degree of protection in the widening move. We are convinced that they will do so this time as well and we therefore view Pfandbriefe as a basis investment in the covered bond market.

The Pfandbrief market at the start of 2018 (PDF)