By focusing on selected indicators, Dr. Franz Eilers, Head of Market Reserach at vdpReserach provides an up-to-date overview
of movements in the housing and office property markets in Germany.

The article below has been shorted and does not contain all explanatory graphics. The complete article you can download as PDF edition. Further editions of our series "Spotlight" are available in under "Publications".

Residential and office properties are expensive and in short supply. This is especially the case in Germany’s flourishing urban concentrations, which have been attracting high net population inflows for years now. In particular, young people – drawn by training and educational as well as job opportunities – are moving to the towns and cities. This, combined with the strong upswing in the German economy, has driven a powerful underlying momentum. Where the rental markets are concerned, this is clearly reflected in the brisk demand for housing and office premises, in falling vacancy rates and in the marked rise in new lease rentals. The upward trend is illustrated even more powerfully in the property ownership and investment markets. Fueled, in addition, by the low-interest-rate setting, we have seen an increase in the propensity to buy for several years, as the persistently strong rise in prices and capital values demonstrates.

By focusing on selected indicators, the following pages provide an up-to-date overview of movements in the housing and office property markets in Germany. Given how sensitively real estate markets react to the economic situation, this overview is preceded by a summary of the macroeconomic conditions. As may be seen, economic growth as well as developments in incomes, employment, interest rates and consumer prices are important factors behind the current boom in the real estate market.

Residential properties located in Germany went up sharply in price in 2017. The vdp property price index for single- and two-family houses rose by 5.5% and for condominiums by 6.8% on average for the year. In addition, the capital values for rental multi-family houses increased by 7.9%. Yet even more striking than the nationwide figures are the index values for Germany’s top 7 cities (Berlin, Hamburg, Munich, Cologne, Frankfurt, Düsseldorf and Stuttgart). Prices for condominiums in these locations surged by 12.1% and capital values for multi-family houses by 14.2% compared with the previous year. 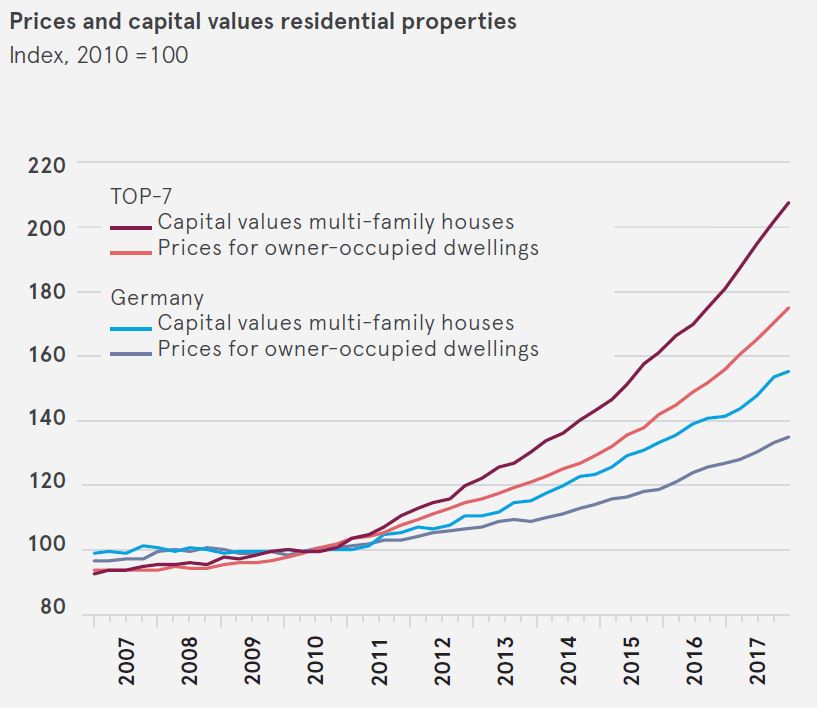 Like the movement in prices, the upward trend in residential construction, too, has intensified since 2010. In 2017, over 300,000 homes were built in one year for the first time since 2001. This growth was accompanied by structural shifts between single- and two-family houses and multi-family houses. Last year, more than 60% of newly constructed dwellings were accounted for by multi-story buildings. The last time similar distribution was recorded was in the mid-1990s.

The figure of 300,000 dwellings will be exceeded in the current year, too. Although building permits were down slightly of late, a substantial number of dwellings not yet started or already under construction means that a similarly high number of completed dwellings can be expected in 2018. Once again, the new construction of multi-family houses will outstrip that of single-family houses. This is mainly attributable to the acute demand for housing in the economically vibrant conurbations and the larger towns and cities, where multi-family houses typically predominate. Particularly in the prosperous urban concentrations, where home-seeking is a time-consuming and nerve-wracking activity, even more new dwellings are needed in the short term. However, this potential is limited by the high level of capacity utilization that the construction sector is already experiencing (as reflected in the growing number of dwellings not yet started or already under construction) and by a shortage of building plots.

In contrast to the new construction of residential properties, sales figures for existing residential real estate have stagnated for many years. All in all, 683,000 residential building plots, single- and two-family houses, multi-family houses and condominiums changed owners in 2016. According to our preliminary estimates, this number dipped slightly last year.

By contrast, the sales volume associated with these transactions rose once again. This was due to the aforementioned strong increase in prices, as a result of which purchase amounts rose accordingly.

It is worth noting that the number of sales is not rising despite the continuous increase in prices. Real estate owners are wealthier today than they were some years ago, at least on paper. However, they are not generating any income from the higher residential property prices because they are not selling their properties. Clearly, owners lack the propensity to sell. Perhaps they are expecting prices to continue rising, or there is a scarcity of alternative investment opportunities. In both cases, sellers’ restraint exerts upward pressure on prices. This brings us to the question that is currently the subject of intense debate, namely whether we might soon be seeing a price correction. Indeed, assumptions and expectations differ greatly on this question.

As was pointed out above, most residential property owners appear to be optimistic, otherwise more dwellings would be placed on the market and sold. Nor are the professional property investors who are regularly surveyed by bulwiengesa for the real estate economy index of Deutsche Hypothekenbank pessimistic on balance. Following the last survey, the barometer of the housing market declined slightly but remains very high at 151.8 points.

Others take the view that individual markets have decoupled themselves from key fundamentals. Seen in terms of local rent levels, expected interest rates, local demographics, available reserves of building land and incomes, they believe prices to be too high. However, very few who hold this opinion expect a severe correction to come any time soon.

After years of considerable price increases, prudence is undoubtedly called for. Residential property prices will not keep on rising unabated, and certainly not at the pace we have observed in recent years. Because this would mean that the average price per square meter of currently around € 7,700 for condominiums in a good Munich location would stand at around € 14,300 per square meter in five years’ time. As things stand today, this scenario is inconceivable.

We expect that the price increases experienced both nationwide and in the cities where prices have surged of late will slow down markedly. However, we are not expecting prices to slump. Although new construction activity is picking up and population numbers are flattening in many parts of the country, housing market conditions in Germany’s top 7 cities, for example, remain strained and are characterized by a stable socio-economic situation.

At present there is no sign of housing vacancy levels like those that built up after the construction boom of the 1990s, and nor – for the time being – are they to be expected. At present, new construction is not strong enough to turn into a fully-fledged boom given the high capacity utilization levels in the construction sector and the shortage of building plots. This is why housing supply and demand will not drift apart. The ratio of rental dwellings to owner-occupied homes here may perhaps shift slightly, depending on how interest rates develop going forward. Rising nominal interest rates will slow down demand for home ownership. However, this braking effect will merely cause the upward movement in prices for condominiums and self-owned houses to flatten.

The office property market is very closely intertwined with the actual and expected macroeconomic developments. Economic growth and higher employment have invigorated the renting of office premises in the last few years. Thus, although there has been little new construction, overcapacities that resulted from the new construction boom back at the turn of the millennium have been reduced. In the meantime, the demand is greater than the supply in some markets. According to our calculations, the weighted vacancy rate in Germany’s seven largest office locations was around only 4.3% as an average for 2017. Such a low office vacancy rate was last recorded in 2001-2002.

This trend has increasingly been accompanied by rising office rents. There is considerable consensus on this between the prime rent indices of Gesellschaft für Immobilienwirtschaftliche Forschung (gif) and of JLL and the much broader-based index compiled by vdpResearch. Office rents are expected to remain on the upward trajectory of the last few years. This is indicated, on the supply side, by the high utilization of floor space capacity and the still fairly moderate new construction activity. In some cities the vacancy rate has even fallen below the level considered desirable for a functioning market. On the demand side, economic growth continues to create new jobs. Although growth in office jobs will be somewhat less pronounced this and next year than in previous years, the upward trend will persist. 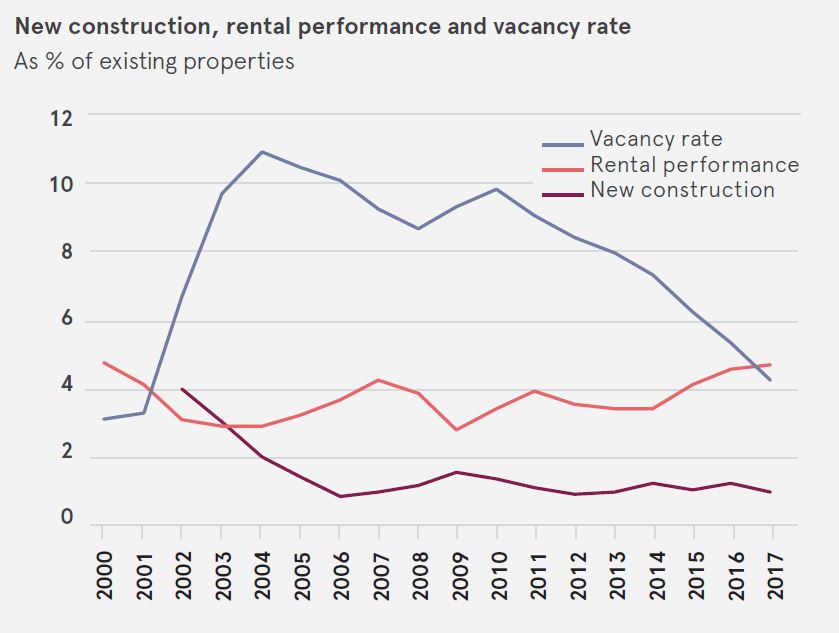 For some time now, capital values for office premises located in Germany have been rising much more strongly than rents. The logical consequence of this are falling initial yields (cap rates, net initial yields). Two factors led to the sharp drop in initial yields: first, the plunging long-term capital market rates, which put downward pressure on the desired minimum return on capital invested; second, the strong demand by institutional investors for real estate investments in Germany. The nominal transaction volume in the office investment market has advanced almost continuously over the last few years and reached a new post-crisis high in 2017. This was mainly the result of cross-border capital flows: more than 60% of investments in 2017 were made by investors from outside Germany.

The disproportionately strong growth in capital values relative to rent developments is unsustainable without a further decline in initial yields, which might seem plausible at the current juncture but is highly improbable looking further ahead. For one thing, various indications suggest that the abovementioned decline in long-term capital market rates has run its course; second, initial yields are at extremely low levels – also by historical standards. Capital values have removed themselves significantly from rents, which have likewise gone up. This gap could only be reduced if rents or the cash flows were to rise faster than capital values. This is unlikely. Thus, the results in the investment market will, in all probability, prove to be not quite as “owner-friendly” in the years ahead as they have been of late, even though declining vacancy rates and rising rents will generate a steady cash flow.